The problem of caste among Indian Muslims 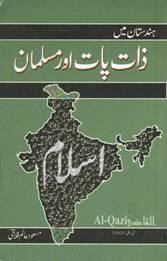 The problem of caste among Indian Muslims is gaining increased scrutiny after a series of political and judicial events–the most recent being the Supreme Court’s notice to the Union government on the status of ‘low-caste’ Muslims of Maharashtra. The traditional response of the Muslim community has been to shove the issue under the rug and charge those who dare to challenge the status-quo as indulging in anti-Islamic activity.

In the past decade, however, attempts have been made to shine the light on this uncomfortable aspect of India ’s Muslim society. Masood Alam Falahi’s ‘Hindustan Mein Zaat-Paat Aur Musalman’ is arguably the most successful of those attempts in providing a comprehensive survey of the problem.

The author has a unique academic background having completed his Alimiat degree from Jamiatul Falah in Azamgarh and his undergraduate degrees in arts and education from Aligarh Muslim University . He is at present pursuing his M.Phil from Jawaharlal Nehru University in New Delhi . It is perhaps because of this background that Falahi adopts a multi-disciplinary approach for this book; he approaches it from disciplines as varied as history, Islamic jurisprudence, sociology, anthropology, and politics.

Tracing the origins of casteism to the Aryan invasions in India, Falahi begins with a discussion of its conception in Hindu religion and how it managed to keep a whole swathe of masses under its yoke. So forceful and assimilative was the Brahminical social order that it even scuttled efforts towards reform by egalitarian movements like Buddhism and Jainism. Under such an unjust order Muslim traders brought the liberating force of Islam to shores of India which led to incremental rise in the ‘low-castes’ adopting Islam. The author contends that the Arab invaders who first came were completely free from casteism and believed in complete equality of mankind as clearly elaborated by Islamic teachings. It was only after the non-Arab rulers took over in 995 CE that proponents of the Brahminical social order were able to smuggle their concept of Varn Ashram into the Muslim society. The inroads were made through a sophisticated manipulation of the concept of Kafa’a (suitability and compatibility in marriage) to the extent that it became synonymous with the Varna Ashram.

Some of the early proponents of this new conception were scholars and mystics attached to the court. The once unitary Islamic society now came to be divided into the Ashraaf (Syed, Shaikh, Mughal, and Pathan) and Ajlaaf (Kunjda, Qasai, Nai, Julaha, etc). Those non-Muslims who came from the ‘upper castes’ were classified in the Ashraaf category and those from ‘low castes’ to the Ajlaaf. Among the Ashraaf, Syeds gained the sacrosanct status similar to the ones of the Brahmans. High positions in the government were reserved for them and their writ ran large especially under the reigns of Iltumish and Balban. It was not until 1325 CE when Sultan Muhammad Tughlaq took over that the Syed supremacy was challenged. He brought in reforms by dismissing the old guard and bringing in a group of scholars and administrators associated with the Sufi Shaikh Nizamuddin Awliya. His fairness, justice, and large-heartedness towards all led a large number of natives to convert to Islam.

Muhammad Tughlaq proved to be a thorn in the eye of the Ashraaf and a group among them conspired to eventually oust and kill him thus bringing an end to his reforms. One of his most vocal critics was Maulana Syed Ziauddin Barani who claimed that it was against God’s commandments to appoint the Arzaals to governmental positions and called on the Sultan to consider his religious duty to deny the ajlaf access to knowledge. Branding them as ‘mean’ and ‘despicable’ he urged that anyone found to be teaching them should be punished and even exiled. He also prohibited marriage between the two groups.

The rulers who followed Muhammad Tughlaq revived the concept of Kafa’at in its various formations. It was Shari’ah minded Sufis like Shaikh Abdul Has Muhaddis Dehlawi who fought casteism tooth and nail which again led to the rise in conversions to Islam. It is the contention of Falahi that it was to counter this threat posed to the Brahminical social order that movements like Bhakti, Vaishno, and Sikkhism were introduced. Despite the best efforts of anti-caste Ulema and Sufis the Muslim society was stratified on the basis of caste especially with regards to marriage.

Falahi provides exhaustive quotes from those ulema, Sufis, and movements which supported casteism, the ones which did not, and others who adopted a dualistic approach. Thus, for instance Shah Waliullah Farooqui Dehlavi supported the by then well entrenched concept of ‘Kufu’ eventhough he had no hesitation in inviting a Hindu ox-cart driver to share a meal with him. The driver was impressed by this brotherly treatment and adopted Islam.

Mufti Muhammad Shafi, of Deobandi school who later on became the Grand Mufti of Pakistan, wrote a book titled Nihayat al Arab fi Ghayat al Nasb in which he made several statements which pointed towards the supposed glory and magnificence of Ashraaf and ruled that customary concept of Kufu doesn’t violate any of the Islamic principles. Maulana Ashraf Ali Farooqui Thanwi, Maulana Syed Mehmood Madani, and Maulana Qari Muhammad Tayyab Siddiqui Qasmi approved of Mufti Shafi’s stance and dismissed the critics as those influenced by the West’s God-less ideologies. There was a disturbance in Deoband when this book came out and Mufti Shafi had to take refuge at Darul Uloom from the hostile crowd.

Maulana Ahmad Raza Khan Barelwi was so respectful towards the Syeds that he wrote that even if a charge of theft and fornication is proven against a Syed, the Qazi shouldn’t have the Niyyah of applying the ‘Hadd.’ He claimed that even though Mughal and Pathan are Ashraaf they are not the Kufu of Syeds. He went on to write, “The original good (communities) have good qualities (and manners) and it is the opposite among the razeel. It was due to this that rulers of the past did not allow the Razeel to get too much education. Now see how the barbers and manhars have spread the various forms of fitna by acquiring education…”

Not only the ulema but also the proponents of modern education were not immune from the claws of casteism. Falahi proves with unimpeachable evidence that Sir Syed had only the Ashraaf interests in mind when he started his educational movement. In an address at the foundation laying ceremony of ‘Madrasa Anjuman-e-Islamia’ in Bareli where children from the so-called ‘low-caste’ communities used to study, he said that he finds no use in teaching English to them. “It is better and in the interests of the community that they are engaged in the old form of study… It appears appropriate if you teach them some writing and math. They should also be taught small tracts on everyday affairs and through which they know basic beliefs and practices of the Islamic faith,” he told them.

Masood Alam Falahi’s meticulous pen doesn’t spare anyone and he has discussed the views of almost all religious and ideological schools of thought present in the sub-continent including the Deobandis, Barelwis, Jamaat-e-Islami, Ahle Hadith, and views of high officials of umbrella organizations like the All India Muslim Personal Law Board. He also provides a list of series of instances of caste based discrimination in 21st century India which include not allowing the ‘Ajlaf’ from attending mosques, denying burials in the graveyard, not respecting the honor of their women, etc. There is also a an elaborate discussion on the reservations for the backward Muslim communities.

For all his attention to detail, however, Falahi doesn’t define ‘caste.’ It would have been helpful if the difference between class and caste would have been clearly elaborated. In his discussion he casts a net which is too wide which fails to take into consideration that there are regional differences among the Muslims of India. In South India, for instance, caste is not the main criteria in marriage as is evident from a survey of matrimonial columns.

Some of Falahi’s criticism and leveling of charges need further investigation. His treatment of quite a few historical sources indicates a casual approach. For example, he claims that Nasiruddin Chiragh-e-Dilli was involved in the killing of Muhammad Tughlaq without any evidence. Similarly, he categorizes some ulema in the casteist class without offering substantial evidence. He places Mufti Taqi Usmani in this category based on a solitary reference where he joking refered to a ‘julaha.’

His recommendations to wipe out casteism while generally helpful also advocate a radical approach. For example, his absolute insistence on marriage between different communities, abandoning of last names, are impractical and some like the first one might even aggravate the situation.

Despite the drawbacks and irrevent tone Hindustan Mein Zaat-paat aur Musalman should be read by anyone who is interested in removing the un-Islamic concept of casteism among Indian Muslims. The criticism of the revered religious and social leaders should be taken in the right spirit. It is only through a critical self analysis that the community can rise itself out of its current morass.